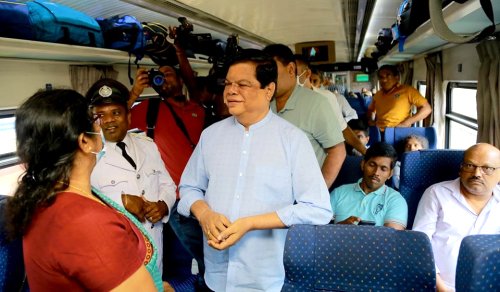 It is special that the minister traveled from Colombo Fort to Jaffna by train with the public, setting an example of strengthening public transport, the minister’s media division said.

Traveling on the intercity train from Mount Lavinia to Kankesanthurai, Minister Gunawardena also observed the facilities provided to passengers.

At Jaffna station, Minister Douglas Devananda and MP Angajan Ramanathan received the Minister of Transport and other officials.

Minister Gunawardena noting that the office train service has been initiated from Kilinochchi to Kankesanthurai for the convenience of people working in the public and private sector and students who have been inconvenienced due to rising fuel prices in the past, said that the necessary measures will be taken to increase the number of trains and the number of trips.

The minister also pointed out that Jaffna’s tourism business will also experience new life with the resumption of the Jaffna overnight express train.

Minister Douglas Devananda, MP Angajan Ramanathan, Secretary of the Ministry of Transport and Highways, Chairman of the Sri Lanka Transport Board and officials from the Railway Department were also present.

Thailand and India sign MoUs and discuss trade and tourism