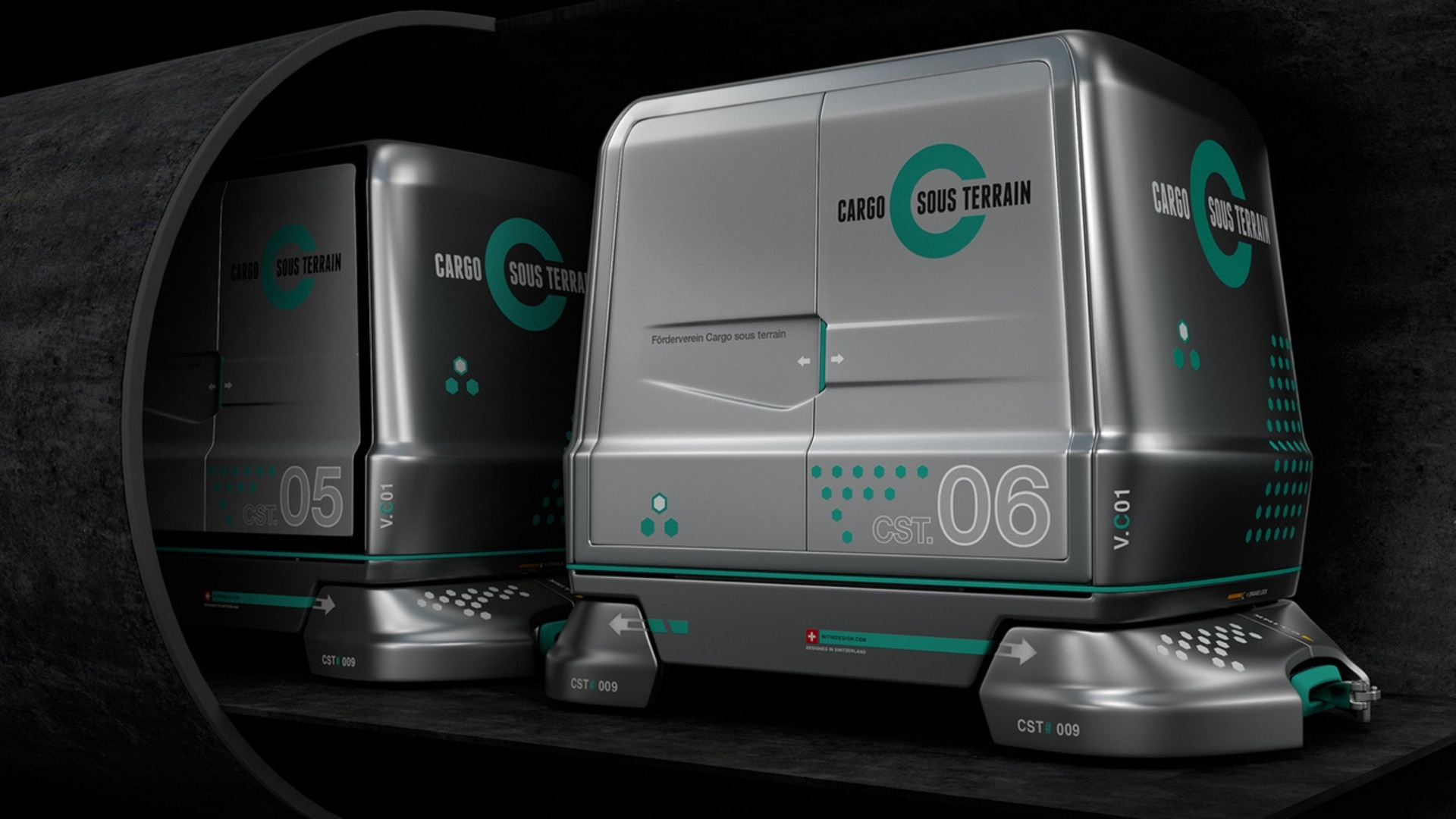 The Swiss advance plans to make the transport of goods underground

Building a network of tunnels of 500 km for the transport of goods under central Switzerland is the ambitious objective of the â€œCargo Sous Terrainâ€ project. The vision has come closer to reality since the Swiss government introduced enabling legislation last month.

In the not-so-distant future, part of the goods now transported by road or rail between Geneva and St. Gallen, or Basel and Zurich, could travel underground in autonomous electric vehicles. We must say “could be”, because there are still many unknowns in the face of Underground Cargo (CST) External linkproject. However, the idea now has the support of the federal government and several heavyweights in the Swiss business community. Investors in CST include Swiss Railways Cargo, Swisscom, Implenia (a major player in construction) and the supermarket chains Coop and Migros.

The Swiss project is not unique. Other countries are considering similar solutions. The Swiss project, however, “has unique characteristics, as it is fully funded by the private sector and it is planned in consultation with its intended users,” explains Antonia CornaroExternal link, professor at the Federal Institute of Technology ETH Zurich specializing in underground systems. â€œIt will also be a multifunctional system, which makes it much more economical. The transport of goods will be combined with the parcel post and Swisscom telecommunication lines. Plus, it’ll run 24/7, and it won’t have any downtime. “

Studies aimed at developing underground logistics systems have been underway for twenty years now. In China, a little over a year ago, e-commerce giant JD.com inaugurated a brand new research institute to study â€œurban logisticsâ€. The initial objective of the institute is to develop solutions for the underground transport of goods.

In several European countries, companies have worked on projects similar to that in Switzerland: Tube Cargo Express in the Netherlands, CargoCap in Germany and MoleSolutions in Great Britain. All of these initiatives are still in the preliminary stages.

In Italy they are working on the Pipenet project, a further development of the idea of â€‹â€‹”pneumatic dispatch” which could make goods travel at high speed (the figure mentioned is 1,500 km / h) in a duct, operating on the basis of a magnetic field. In this case, the packages would go in smaller containers than those envisaged for the other projects mentioned.

The offersExternal link The legislation, presented to the Swiss parliament by the federal government last month, is a crucial first step in what risks being something of a marathon. The bill insists on the principle of non-discrimination: any service offered will be open to any customer. At the same time, he rules out the idea of â€‹â€‹building several parallel systems to transport goods underground. The bill also provides that â€œthe capital of the owners and managers of the installation and the voting rights directly or indirectly linked to it must be predominantly Swissâ€.

Although it is not specified, the designers of the CST project are careful not to generate too much interest from Chinese companies. Last March, parliament passed what is known as â€œChinese lawâ€, a motion proposing to create â€œa legal basis for controlling foreign direct investment in Swiss companiesâ€. Just two months ago, CST declined a financing offer from Chinese investment giant Dagong.

If the Swiss government does not want the property to be owned by foreign interests, it still does not want to get involved in the financing of the project, because “it cannot and does not want to intervene indiscriminately in the market for the trafficking of goods. “.

The construction of the entire CST network, which will extend over 500 km and, according to the promoters’ intentions, will be completed by 2045, should cost between 30 and 35 billion francs. Just for comparison, AlptransitExternal link – with its basic Gotthard, LÃ¶tschberg and Monte Ceneri rail tunnels – cost around 22 billion francs.

It will be worth it, Cornaro thinks: â€œfreight traffic is increasing enormously, and it cannot be managed by conventional means, ie road and rail. Analyzes have shown that the system is going to be financially attractive to users, otherwise they would not invest in it.

The financing aspect will only be one of the many challenges the project will face. It’s not uncommon for infrastructure projects like this to go over budget, without even considering all the unknowns, from geology to environmental issues, or the lengthy negotiations to be expected with municipalities and private landlords.

First step: a tunnel from HÃ¤rkingen to Zurich

CST’s objective is first to build a section of the tunnel between HÃ¤rkingen, a place where there are several warehousing and distribution facilities, and Zurich. Stretching 67 km, this tunnel would extend 20 to 100 meters underground, would have around ten transshipment â€œhubsâ€ and would cost around 3.4 billion francs according to CST estimates. It should be operational by 2030.

In a second phase, if the tunnel experience is positive, the network will be extended along the east-west axis, from St. Gallen to Geneva, by integrating the cities of Basel, Lucerne and Thun “in a network covering the main flow of goods in Switzerland â€, states the federal government in its announcement.

The Cargo Sous Terrain network would then extend to all of central Switzerland. But the first step is to build the HÃ¤rkingen-Zurich line.

The tunnel must have three separate boreholes or tracks: one for each direction and another for upkeep and maintenance work placed in the middle.

To transport the goods, electric and autonomous wheeled vehicles will be used. These will move at a constant speed of 30 km / h. Each can take a load of two pallets. If necessary, the containers can be refrigerated. Right under the roof of the tunnel, the system will also have an overhead cable car that will operate at double speed for the rapid transport of small packages or quantities of goods.

In addition to reducing the road and rail burden, this project should make a positive environmental contribution. A study commissioned by CST found that this ‘metro system’ (including transport to hubs and distribution) would halve CO2 emissions from what they are currently with a 90% combination of transport by road and 10% by rail.

Between 2000 and 2018, freight transport by road and rail experienced almost continuous growth: metric tonnes per km (a unit of measure for freight transport that maps the number of tonnes transported against distance traveled) rose 19% to $ 27.9 billion.

This growth, according to forecastsExternal link

Given the pressure on road and rail infrastructure as it stands and the difficulty of building new ones, especially in a highly urbanized area like central Switzerland, alternative solutions must be found. The Cargo Sous Terrain project is one of them.