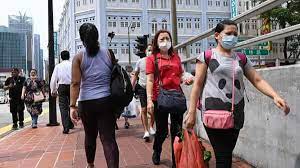 SINGAPORE, August 24: Singapore eased its social mix restrictions on COVID-19 on Wednesday and said wearing masks will no longer be mandatory from August 29, except on public transport and hospitals, as hospital cases dailies have halved in the country.
Speaking at a press conference to announce the easing of the mask mandate, Deputy Prime Minister Lawrence Wong said masks will only be mandatory in two settings, the first being healthcare facilities, homes care facilities for residents and ambulances, as well as the interior premises of hospitals and polyclinics.
And the second being public transport, Channel News Asia quoted him as saying.
Wearing a mask at the airport and on private modes of transport such as school buses, private bus services and taxis will be optional, he said.
The easing of COVID-19 restrictions came as daily hospitalization cases halved from over 800 in July to less than 400 these days, according to the report.
But it will also be needed in public transport such as boarding areas at bus interchanges and Mass Rapid Transit platforms, a pan-island metro-train network most widely used by commuters, another Straits Times report quoted Wong.
However, Wong warned that while the pandemic situation is much better today, Singaporeans should be mentally prepared for any sudden changes as the next variant of COVID-19 could be more aggressive and dangerous.
Health Minister Ong Ye Kung said Singapore should brace for a “northern hemisphere winter wave” at the end of the year, in which the United States, the United Kingdom and the Europe are all preparing.
Vaccination remains the main line of defense, said the multi-ministerial task force, which is co-chaired by Deputy Prime Minister Wong, Health Minister Ong and Trade and Industry Minister Gan Kim Yong.
Border measures will be eased as non-fully vaccinated travelers entering Singapore will not need to submit to a seven-day Stay-At-Home Notice (SHN) upon arrival from Monday.
These travelers will also not have to take a polymerase chain reaction test upon exiting SHN.
They will continue to need a negative pre-departure test taken within two days of leaving for Singapore, according to the report.
Non-fully vaccinated long-term pass holders and short-term visitors aged 13 and over will not need to apply for an entry permit to enter Singapore from Monday as well.
Wong also said the multi-departmental task force will not be suspended as the pandemic situation may suddenly change.
The task force continues to closely monitor the situation and has plans in place for various contingencies such as strengthening health care capacity and scaling up vaccination operations should the need arise, he added. .
“I hope we don’t need to invoke these measures again,” he said, referring to safe management measures. (PTI)