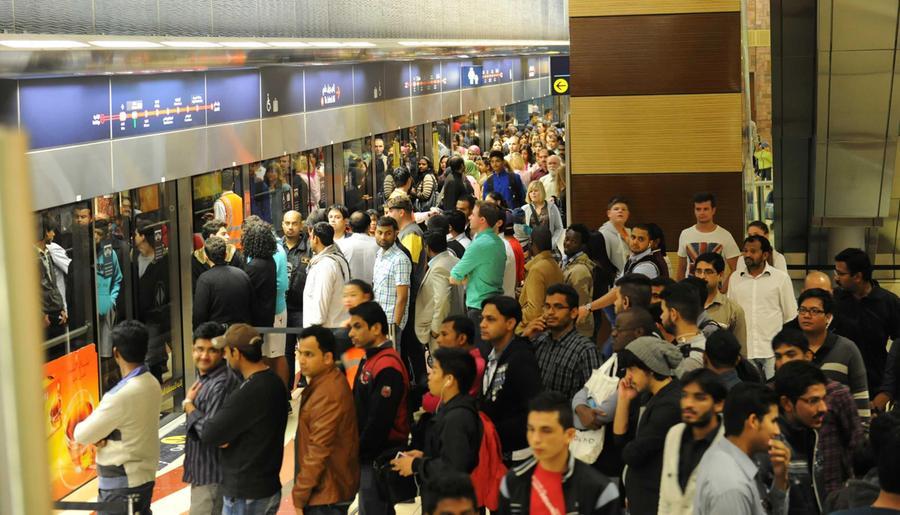 Recent fuel price hikes have prompted UAE residents to ditch their cars and embrace public transport, even if it means commuting for hours.

Indian expat Abbas Hussain is one such resident whose daily commute, which involves the Dubai metro, bus and electric scooter, takes two and a half hours and stretches over 100 km.

Hussain leaves his residence in Mirdif at 9 a.m. to reach his place of work at 10:30 a.m. His journey begins on his e-scooter, which he takes to the nearest bus station about 2 km from his residence. The next leg of his journey is the bus, while the last leg is the subway.

“For me, the nearest metro station is Centrepoint, which takes about 25 minutes from my house,” said Hussain, who works at a private company in Al Quoz.

Although the journey is long and time-consuming, Hussain said his overall commute, especially on the subway, was smooth. “I find a place to sit (in the metro) because of the first station on the red line. And from the arrival station, Al Safa, my office is about 10 minutes by electric scooter.”

Hussain, who previously used a car lift, said he saved time and money by switching to a more sustainable mode of transport.

“It took over an hour and a half to travel in the elevator after dropping off the other passengers,” he said. “In the evening it took even longer. I even saved money after switching to the e-scooter.”

Another advantage of the e-scooter is that Hussain doesn’t have to worry about battery drain; he can charge his e-scooter at his office right next to his desk.

Another expat, Ugandan Adam Ssanyando, relies entirely on his electric scooter to get to work. Ssanyando works at a government facility as a security supervisor, which requires him to alternate between shifts. This was his main reason for opting for personal transportation.

“I had problems getting to my place of work earlier, but everything has been resolved now,” he said.

Ssanyando, who lives in Deira, had to walk or call a taxi to get to work on time because it was difficult to get around by metro or bus.

“The distance between my residence and my place of work is about 10 km and now I take about 20 minutes to cover the trip by electric scooter,” he said.

Although the ride can be more difficult in the summer months, Ssanyando said all he needed was a head support or handle support to hold an umbrella. “I know it will be difficult for me in the summer to commute on a scooter for about 20 minutes, but there are plenty of options for covering up to beat the heat,” he said.

In the end, the e-scooter is cheaper than traveling by car, for which he would have had to spend around 200 Dh each month. “Now I save around Dh400-500 every month with this sustainable ride,” he said.

Dubai police have urged cyclists and e-scooter riders to wear appropriate helmets and reflective jackets, especially when cycling near highways.

Bright white and red reflectors should be fitted to the front and rear of the e-bike or e-scooter. Police also said runners should also respect designated paths for this type of transport

Demand is skyrocketing for electric scooters

In recent months, the demand for electric scooters has increased, and wholesalers and retailers expect a further increase in the coming months.

Aladdin Akrami, a retailer of e-bikes and e-scooters, said its sales have skyrocketed over the past two days.

“What we need to understand is that people prefer bicycles to e-bikes,” he said. “Bikes have become part of commuting, as well as fitness. But bikes are not for the summer months, so people prefer e-scooters. The sale of these products increases in early May, but this year, it has already increased now.”

Akrami said he was a bit surprised to record more than 70% of e-bike sales. “I realized maybe it was because of the fuel hike,” he said.

He also pointed out that not all electric scooters are preferred by residents. “They come in different shapes and specifications. But people prefer lightweight models with longer-lasting batteries so they can be carried on location,” he said.

Tourism Awards: winner of the marketing campaign of the year