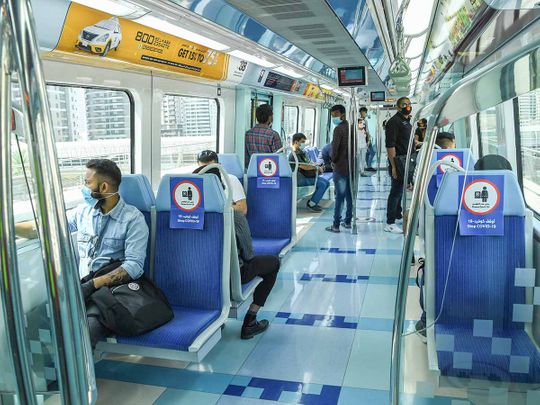 He added: “Secondly, the pandemic has accelerated the digitization and use of technology in urban mobility. Cities have implemented, for example, contactless ticketing, and we have seen a rapid growth in electric mobility such as electric buses. We also realized that decarbonization is a priority for urban mobility.

The “4th MENA Transport Congress and Exhibition” is jointly organized by UITP and the Dubai Roads and Transport Authority (RTA). Held from Sunday to Tuesday at the Dubai World Trade Centre, the Transport Congress discusses the role of public transport and how the sector will look like in a post-pandemic world.

Mezghani acknowledged that some people are still afraid to use public transport, but he added that “if we look at the scientific studies, there is no proven risk of using public transport when people are wearing face masks. Commuters – especially in cities – take public transport for short journeys, and every time the doors open, the fresh air comes in”.

He also pointed out that in most cities monitored by UITP, public transport ridership has increased to 80% on weekdays; and almost 100% on weekends.

“But we [transport officials and experts] really need to respond to public apprehension and work on people’s psychology so that they feel safer using public transport. We need to communicate more and better explain to people that they are really safe on public transport. »

Moving forward, Mezghani said: “We have also learned that we need to redefine public transport and provide door-to-door mobility and not just station-to-station.”

He explained: “This means that we have to combine public transport with on-demand mobility, such as scooters or bicycles. We need to offer people the opportunity to go door-to-door or provide first and last mile solutions. Public transport is the backbone of mobility in cities, but this should be complemented by on-demand and shared mobility solutions.

On a positive note, Mezghani said, major transportation projects — including the promotion of self-driving vehicles — have not been hampered by the pandemic. However, he added, the mass deployment of driverless vehicles is not happening anytime soon. “Two or three years ago, we thought that driverless cars would arrive very soon. But now we realized that it will take time. The technology is there, but the problem is the legislation and the coexistence of driverless cars with regular vehicles. This interaction had to be resolved quickly.

Regarding the future of mobility and autonomous vehicles, Mezghani stressed that it is more important and strategic to focus on driverless mass transport. He said: “I don’t think driverless cars will solve the congestion problem because we’ll just have more cars on the road – even if they won’t be driven by people. What we really need more of is to have autonomous or driverless public transport because more people can be transported and not have individually owned driverless cars.