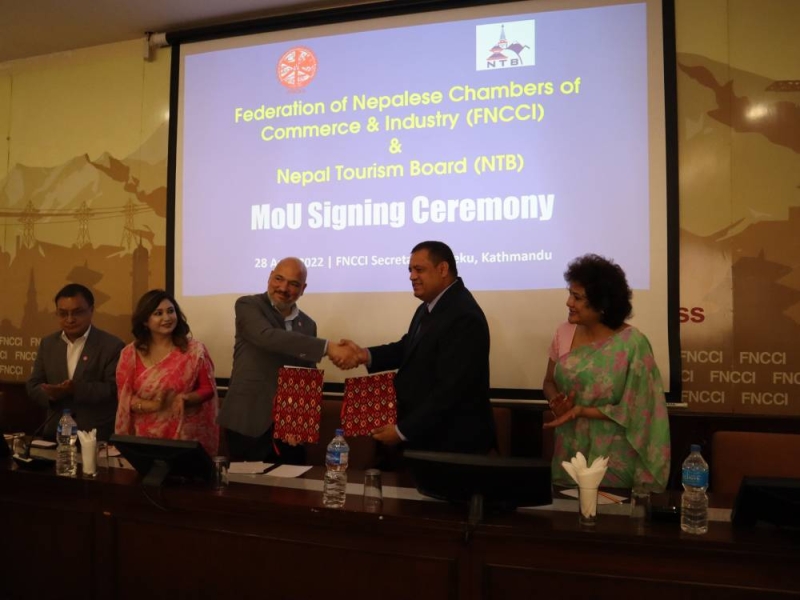 The Nepal Tourism Board (NTB) and the Federation of Nepal Chambers of Commerce and Industry (FNCCI) have signed a Memorandum of Understanding with the aim of cooperating in promoting tourism in the country.

With this, the two organizations have agreed to cooperate in promoting and developing the concept of the tourism industry.

On the occasion, Regmi said that tourism in Nepal could be developed through the cooperation of the private sector. He said that the initiative taken by the federation was positive and added that the council was always ready to collaborate with the private sector. “In particular, the council has its own programs for the promotion of border tourism. The federation’s proposal to organize other tourism-related programs can also be considered,” he said.

He further informed that the NTB has already organized tourism fairs and markets in Nepalgunj, Dharan and Dhangadhi for the promotion of cross-border tourism in Nepal.

Likewise, the President of the FNCCI, Shekhar Golchha, has proposed to organize a massive program in the coming days with the participation of all tourism-related organizations for the revival of the tourism industry which has been paralyzed by the pandemic. of COVID-19. “Developing tourism infrastructure, public transport and improving the quality of places have become imperative. In addition, Nepal should take initiatives to attract quality tourists. We can expect good results by working together “, did he declare.

President Golchha also said there is a need to make Bhairahawa Airport the cheapest and most accessible airport in the region and to develop and expand Tribhuvan International Airport. He said that preparations are underway to hold the Nepal-India Investment Conference in the near future and roadshows will be held in various Indian cities.

A version of this article appears in the April 29, 2022 printing of The Himalayan Times.