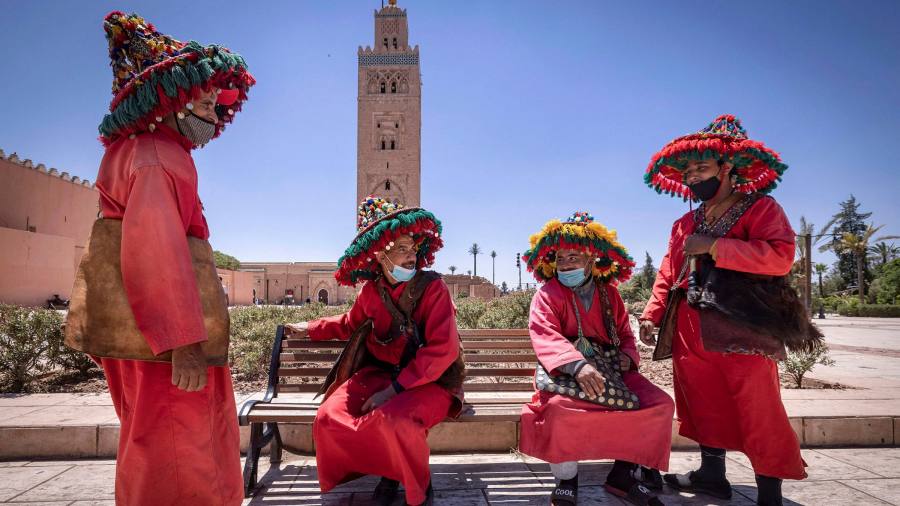 The pandemic hit Morocco just as the Marrakech Green Wheels bike travel company entered its peak season in the spring, when the heat is less severe. Everything was canceled and the company hasn’t had a single booking or a penny of revenue since. Now, founder Adel El Filali has stopped waiting for tourists to return.

“Forget about tourism until it comes back, you can’t trust it at all,” says the 31-year-old, who started working in fashion production, while his co-founder works in a call center. Instead, they have been active in organizing cycling activities for locals on a voluntary basis.

Orders from Morocco are open and vaccinated visitors are exempt from quarantine, but in the old town of Marrakech, many restaurants and shops have yet to reopen as attendance remains low.

The pandemic’s toll on tourism, which the World Bank says contributes 11% of the country’s GDP and accounts for 17% of the workforce, has been felt both locally and nationally.

As other sectors of the economy begin to rebound, tourism “will continue to suffer,” said Yasmina Abouzzohour, research fellow at the Harvard Middle East Initiative. In 2020, she warned that â€œbetting on the tourism sector to accelerate economic recovery will lead to disappointing resultsâ€.

A reduction of more than half of tourism income in 2020 was a major factor in the country’s recession – its first since 1995. Overall, Morocco’s GDP declined by 6.3% in 2020, according to Capital. Economics and, while the IMF says growth is expected to accelerate to 4.5% in 2021, the service sector is expected to lag behind.

Morocco began to prioritize tourism as an economic sector in the early 2000s. Just before the 2019 pandemic, foreign tourist arrivals were 7 million people, up from 2.2 million in 2002. But, in 2020 , tourist arrivals fell by 78.5%. The National Federation of the Hotel Industry predicts that 2021 will be worse than 2020 for the entire industry.

The government stopped giving aid and said ‘open the restaurants’ – but for which customers?

Workers in the tourism sector were entitled to 2,000 dirhams (â‚¬ 200) per month from the government. However, the fact that many workers do not have contracts, along with other administrative issues, meant that many people fell through the cracks – and the sum would barely cover the rent anyway. in Marrakech.

â€œThey stopped paying [in July 2020] and said ‘open the restaurants’ – but for which customers? â€œ, Remembers Rachid Joualla, 49, waiter at the restaurant La Tanjia, which currently receives 30 to 40 guests a day, against around 200 before the pandemic.

As bookings and visitor numbers plummeted, Yasmina Olfi, a Marrakech-based social media influencer who posts travel articles, saw her number of Instagram followers increase and hotel invitations across the country. .

â€œPeople who couldn’t get to Morocco would travel by proxy through my travels,â€ she said. She sometimes promoted free places because “it was the duty of people who have a large community to showcase beautiful places and encourage local tourism.”

But that did not translate into real experiences. Hundreds of Riads – traditional houses turned into boutique hotels – have gone without reservations for over a year.

Riad Dar Zaya in Marrakech was hit with large-scale cancellations in August after the government reintroduced a 9 p.m. curfew, said Yassine Alaatchane, the hotel manager. â€œThe government has asked Riads to give discounts to local customers, but Moroccans don’t like old houses because we know those houses.

â€œThe theft caused a lot of talk,â€ says Fabiani. â€œThey hope to capitalize on the flow of Moroccan Jews returning to their old homes and shrines. “

But, in the Marrakech Mellah, the Jewish quarter, the blue-and-white tiled courtyard of the Slat al-Azama synagogue is empty, and local market vendors haven’t seen more tourists than usual.

â€œA few groups have come this year,â€ says Abdul Boussabir, a 54-year-old spice seller, who closed for months in 2020. â€œBut Moroccan Jews have always come here. It’s like before, [or] even less.”

Cycling enthusiast El Filali tries to stay optimistic. â€œThis is not the first time that Marrakech has lost tourists,â€ he said, referring to a 2011 terrorist attack that killed 17 people in the city’s main square, Jemaa el-Fna. â€œIt will resume, but it’s long. Even with the vaccine, things are still not moving. “

Budget 2022: “Free public transport for all”