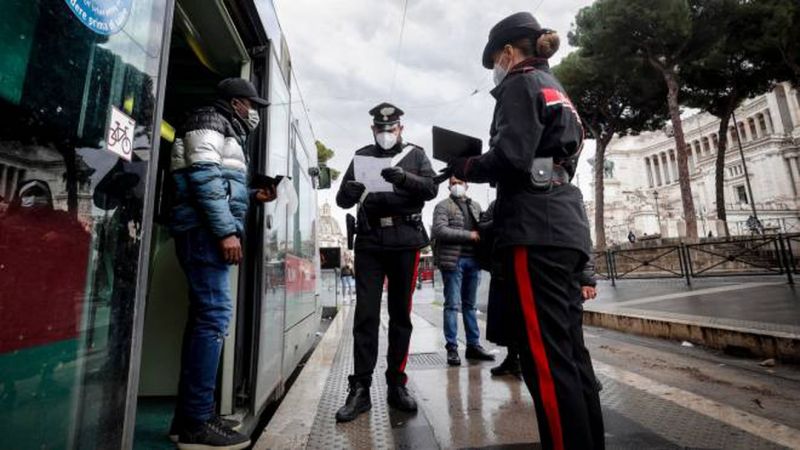 This decision, which is part of a circular sent Thursday to the city prefects by the Interior Ministry, precedes the requirement of the Green Pass for all people traveling on local public transport networks, including buses, metro and tramways, as well as regional rail transport.

Officials of local public transport companies should also assign staff, with public official status, to help verify that passengers have the Green Pass, a certificate proving that the holder has been vaccinated, tested negative or cured of the covid. -19.

The control of public transport must be carried out in such a way as to guarantee the fluidity of the service and “avoid” possible “gatherings and any repercussions on public order”, according to the circular signed by the chief of staff of the Minister of the Interior Bruno Frattasi, reports Italian news. ANSA agency.

In Rome, where plans are currently being finalized, checks should be carried out at public transport stops and terminals as well as by â€œmobileâ€ teams on city buses and subways.

In Milan, checks will be carried out by a mix of ATM public transport workers, public officials and municipal police, according to the city’s mayor, Beppe Sala.

Some towns in Italy could benefit from military support, but soldiers would not verify green passes. Instead, they would help with traffic stops, freeing up police to conduct Green Pass inspections, ANSA reports.

From December 6, the “reinforced” version of the Green Pass will only apply to people vaccinated or recovered from covid-19, and not to those who have not been vaccinated.

This means that those who are not vaccinated will no longer be able to access indoor restaurants, bars, cinemas, theaters, nightclubs or sports stadiums.

Unvaccinated people who have to travel on local public transport or regional trains in Italy after December 6 can get the Green Pass by getting a negative covid test result every 48 hours.

This requirement will be in effect until January 15 and could be extended until 2022.