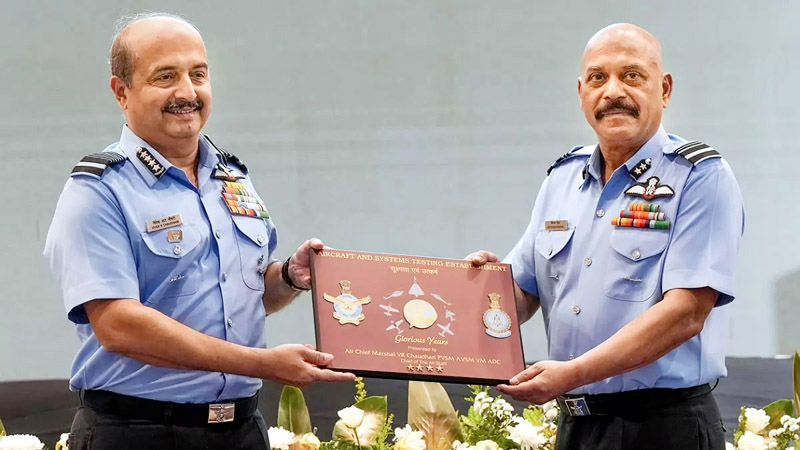 BENGALURU, Nov 4: Air Chief Marshal VR Chaudhari said on Friday that India’s aerospace industry is experiencing unprecedented growth to become a self-sustaining ‘Aatma Nirbhar Bharat’.
“With each passing day, the aerospace industry is witnessing unprecedented growth to become a self-sustaining ‘Aatma Nirbhar’ Bharat,” he said.
On this occasion, it is important to highlight government policies that aim to support the holistic integration of advanced technologies, the impulse to national manufacturing, the strengthening of public-private partnership and the strengthening of the overall indigenous component in the defense sector, he said.
“These have created a solid roadmap loaded with a wealth of opportunities for our flight test community to proactively engage and contribute effectively to achieving national policy goals,” said he added.
The Air Chief of Staff emphasized the need for autonomy in the field of military aviation and the certainty of ASTE in these efforts.
Chaudhuri hailed the immense contribution made by the institution and its alumni in numerous aircraft development, militarization and upgrade programs which have played a pivotal role in improving the operational capability of the IAF.
He commended the efforts of the Indian flight test fraternity in the design, development and operationalization of successful weapons platforms such as LCA Tejas, ALH Dhruv and LCH Prachand, thus highlighting the capability of the ecosystem Indian Defense Aerospace.
Earlier, at the close of the Golden Jubilee celebration year, an International Flight Test Seminar (IFTS) was inaugurated by Chaudhari.
The seminar served as an important platform for interaction between the flight test crew, defense research and production agencies, distinguished scholars from academic institutes and representatives from international agencies engaged in the flight tests.
Various commemorative events were organized throughout this important year with the participation of all.
Over the past five decades, ASTE has actively contributed to various integration and development projects in support of the introduction and absorption of niche aerospace/defense technologies.
Its flight test crew actively participated in the design and development program of Saras MK-II and Hansa NG, in addition to various complex aircraft upgrade and weapons integration programs.
To commemorate this special occasion, an Indian Post ‘Special Cover’ was issued by the Chief of the Air Staff. The CAS was accompanied by Commodore Commander ASTE Air Marshal BR Krishna, DCAS Air Marshal N Tewari and Commander ASTE AVM J Mishra. (UNITED)

Public transport would be free for those under 21 using the ‘climate ticket’: Greens