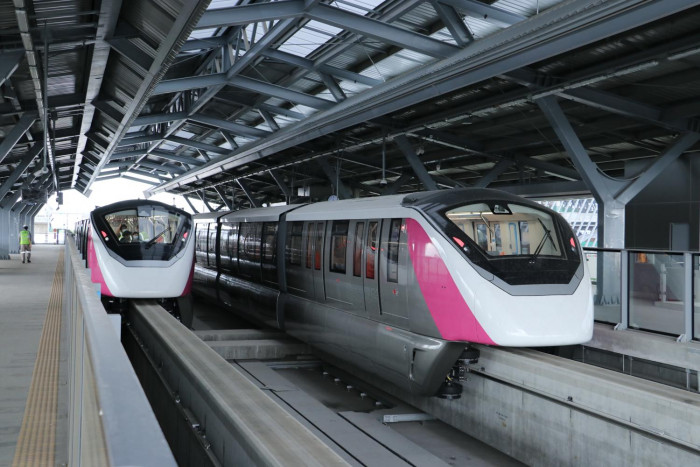 Cars at rest for the MRT’s Pink Line electric rail project. The 34.5 kilometer rail link between Nonthaburi and Min Buri is designed to meet the demand of commuters in northern Bangkok.

The Thai government has drawn up a series of initiatives, such as the Climate Change Law, the National Energy Plan and the Long-Term Low Greenhouse Gas Emissions Development Strategy, to address the issues.

WHAT IS GREEN MOBILITY?

The term green mobility is often broad, but Ms Luger said it is a critical macro-level element in urbanization megatrends.

“As the population grows, and particularly in cities, there is an increasing need to move people safely and sustainably from point A to point B, which increases the demand not only for the rail but for all modes of transport,” she said.

According to the International Energy Agency (IEA), transport contributes around 27% of all global emissions. The five main types, ranging from most polluted to least, are large cars, aviation, cars, buses, two or three wheelers and rail.

Transportation is the only sector that has increased its carbon emissions over the past 20 years.

“If you look at the carbon footprint, particularly in relation to road travel, in fact only around 3.5% of CO2 emissions from the transport sector come from rail. I am convinced that if we strive to achieve a more carbon-neutral world, rail transport has a key role to play in both passenger and freight transport,” said Ms. Luger.

Congestion and pollution are two big challenges for Bangkok. Officials, including Bangkok’s new governor and Thailand’s prime minister, have outlined how sustainability could play a key role in post-pandemic economic recovery.

As for the private sector, Alstom, which has been operating in Thailand for four decades, currently has several projects aimed at solving pressing problems affecting the environment, as well as training programs that promote the Thai talent pool.

Highlighting smart technology, the BTS Yellow Line provided by Alstom in Thailand is the country’s first automated monorail. Alstom Innovia APM 300 autonomous monorails can reach a maximum speed of 80 km/h. The line officially began testing towards the end of October last year. It is expected to carry around 42,000 passengers per day.

In addition, Alstom is also supplying 42 Innovia four-car monorail trains and 30 four-car driverless monorail trains for Bangkok’s Pink and Yellow Lines. The 34.5 km long rail link between Nonthaburi and Min Buri – also known as the Pink Line – is designed to meet the demands of commuters in northern Bangkok. The 30.4 km Yellow Line monorail system, with 23 stations in total, will run between Lat Phrao in Bangkok and Samrong in Samut Prakan.

“The pink and yellow lines are monorails, which is a fantastic innovation that we are bringing to Bangkok. And at full capacity, this system will be able to carry around 400,000 passengers per day. Imagine that one in 10 passengers took a car Au Instead, that’s 40,000 more or fewer cars on the road every day,” Ms Luger said.

Other projects include supplying 113 diesel locomotives to the National Railway of Thailand, laying track works for the extension of the Blue Line and Green Line, and maintaining signaling for the Purple Line. of Bangkok under Alstom’s 10-year contract.

In education, Alstom recently partnered with the Faculty of Engineering at Chulalongkorn University. The two parties signed a memorandum of understanding this month to foster greater collaboration in local industry research and development, as well as education and training programs in this highly specialized field of railway engineering over the next five years.

“Chula Engineering’s expertise, such as mechanical engineering, electrical engineering, civil engineering, and others, can help build the foundations and theories. And when students can engage in practice with market leaders like Alstom and learn the real applications in the industry, they will be able to improve their skills and refine their knowledge,” he said.

Meanwhile, Alstom is also using Bangkok as a global engineering delivery center in Asia-Pacific for railway signaling and systems integration. There are over 400 engineers in the company, 85% of whom are Thai, with the rest coming from 25 different countries.