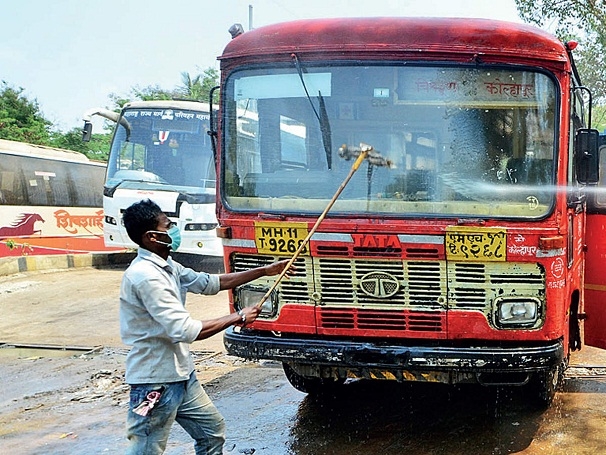 In the context of the losses suffered during the current COVID-19 pandemic, the Maharashtra State Road Transport Corporation (MSRTC) has launched a freight transport service under the brand “Mahacargo” under which the passenger bus changes have been transformed into freight wagons. Now the state government has asked various departments to assign at least 25 percent of freight transport jobs to the MSRTC. In addition, tire retreading for at least half of government vehicles must be done at the MSRTC shop. So far, under â€œMahacargoâ€, the MSRTC has converted 1,150 passenger buses into freight vehicles through such modifications.

According to the latest information, it has finalized the Standard Operating Procedure (SOP) for the operation of freight transport. To date, the MSRTC has made 90,000 trips covering 125 lakh km and transported approximately 7 lakh metric tons of cargo of various types. Based on this experience, the Home Office recently asked various departments to allocate 25 percent of freight transport jobs to the MSRTC. These departments, with the exception of the Department of Food and Civilian Supplies and the Department of Consumer Protection, have been asked to provide 25 percent of the transport work for which they bid and rope. in private carriers. The rates at which they give jobs to private carriers will also apply in the event of MSRTC. However, the MSRTC will not be required to participate in the tendering process, said a recent statement issued by Meghana Shinde, office manager, Home Office. Likewise, tire retreading of 50 percent of public transport vehicles, municipal transport vehicles and other government business vehicles is expected to be done at the MSRTC tire retreading plant. In addition, maintenance and repairs of heavy vehicles and large passenger vehicles of government departments should be carried out at the respective divisional workshop of the MSRTC, the statement said.

The state government’s Department of Transportation issued a notification on May 18 last year allowing the MSRTC to transport goods by passenger bus in horse-drawn carriages until further notice. As a result, the MSRTC started freight transportation by first transporting a batch of mango boxes from Ratnagiri to Mumbai on May 21, 2020. Later, given the response to the service, the MSRTC changed the buses from passengers. It removed passenger seats, produced doors at the rear of the bus, partition walls, closed panel windows, etc.

In the process, the MSRTC freight transport service already has several clients ranging from district collectors for the transport of food grains under the public distribution system, Balbharti, Mahabeej, Election Commission for the transport of electronic voting machines , Forest Department for sapling transportation, Food Corporation of India, Rashtriya Chemicals and Fertilizers, Shirdi Sansthan, and even large private companies, etc. spare parts, books, etc. The ‘Mahacargo’ facility is available 24/7 throughout Maharashtra.

Inbound and outbound freight transport was virtually stable in 2019