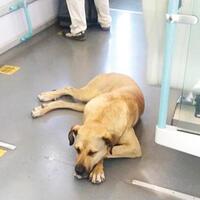 A dog has taken the internet by storm after photos circulated on social media showing him commuting on Istanbul public transport.

The buzz started when someone posted a photo of the dog on the tram in Istanbul with the caption saying, â€œA security guard wanted to take the dog out, but he resisted. Then he said, ‘Has anyone disturbed? Because otherwise, he will get off at KabataÅŸ station â€.

Subsequently, several people posted photos of the dog to separate locations, on buses, metrobuses and ferries, along with the dates it was spotted.

â€œHe doesn’t get on board by accident. The dog is circling the city from west to east, â€one social media user joked.

“I saw the dog on a bus in Pendik [a district on the far Asian side]. Please put the dog back on public transport to the city center or it will start circling the country, â€another wrote.

Some have named the dog “Evliya Ã‡elebi”, in reference to the 17th century Ottoman explorer who traveled through the Ottoman Empire and neighboring lands over a period of 40 years, recording his commentary in a travelogue called the SeyÃ¢hatnÃ¢me (Travel book).

A Twitter account was opened for the dog, with the username “Ä°stanbul’u Turlayan KÃ¶pek” (The Dog Touring Istanbul), with articles on updates on where he was last seen. times.