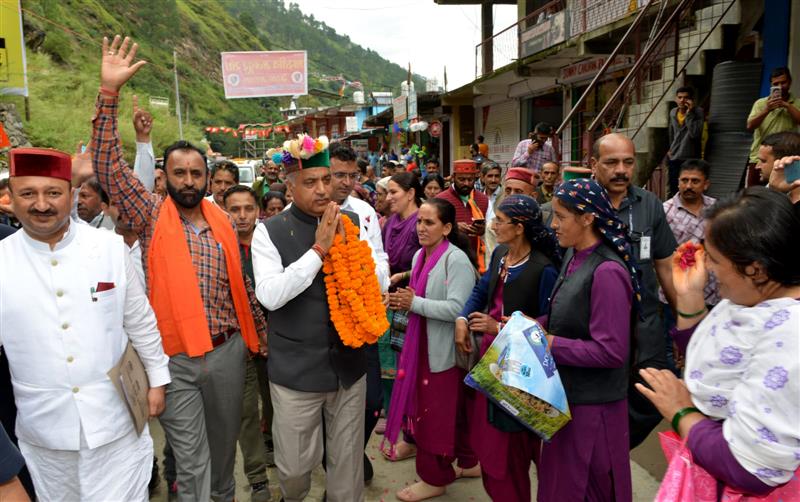 Chopal’s tourism potential to be exploited : Thakur : The Tribune India

Chief Minister Jai Ram Thakur today inaugurated and laid the foundation stone for 30 development projects worth around Rs 175 crore at Nerwa in the Chopal Assembly constituency of Shimla district.

He addressed a public meeting during the program “Pragatisheel Himachal: Sathapna Ke 75 Varsh” in Nerwa. He said efforts would be made to exploit the immense tourism potential of Chopal. He added that the state government had opened an SDM office and a university in Kupvi area and transformed Nerwa into a nagar panchayat. Several other important offices had been opened in the district of Chopal.

Thakur said the welfare works carried out for the people by the BJP government had upset the opposition leaders, who were offering free bees. He urged the people of the state not to get carried away by the opposition demands and wholeheartedly support the BJP in the upcoming assembly elections. MP for Chopal, Balbir Verma, said development projects worth millions of rupees were being carried out in the constituency.

The CM also participated virtually in a meeting regarding the execution of the Kishau Dam project chaired by Gajendra Singh Shekhawat, Union Minister for Water Resources, River Development and Ganges Rejuvenation. He urged Shekhawat to expedite the deal to avoid escalating project costs as Himachal and Uttarakhand had dealt with all issues related to relief and rehabilitation.

Thakur said Uttarakhand and Himachal would equally share the electricity generated by the Kishau dam project, proposed to be built on the Tons River, a tributary of the Yamuna, along the two states’ borders. He urged the Union Minister to freeze the input power cost at Rs 2.30 per KWh in the formula to keep the cost of the electric component low.

He said the Center would bear 90% of the cost of the water component and the beneficiary state would pay the remaining 10%.

The mask is no longer compulsory in public transport