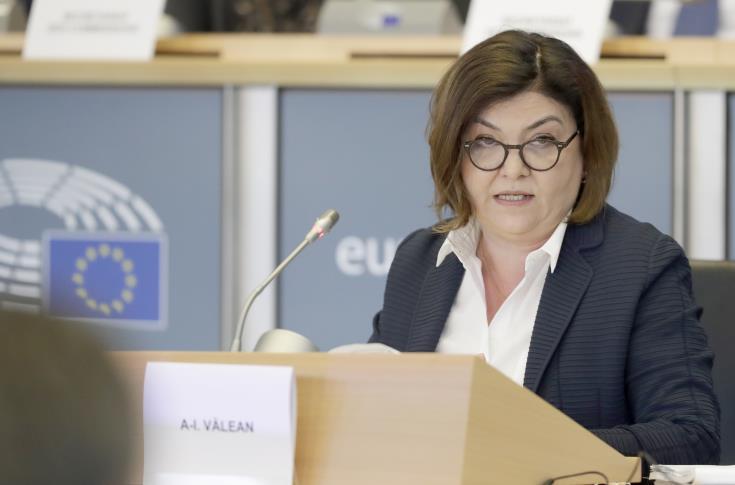 Challenges and opportunities in the aviation, maritime and public transport sectors | Stockwatch

Transport Commissioner Adina Vălean spoke about the challenges but also the opportunities that the new EU sanctions against Russia bring to the maritime sector in Cyprus, the future of air transport in the framework of the green transition, and explained how the EU can help increase air connectivity in Cyprus, in an interview with the Cyprus News Agency.

Responding to written questions on the occasion of his visit to Cyprus to participate in the “Maritime Cyprus” conference, Vălean also spoke about the prospects for public transport and maritime passenger lines in Cyprus.

Among other issues, Vălean said that Cyprus had made a good start in improving its public transport after years of being a champion in car ownership and use, while stressing that plans to establish a tram line in Nicosia could be the first step towards the return of rail to the country.

She also said that the return of a passenger shipping line with Greece is an important step which can also be a model of connectivity with other EU and non-EU countries.

Responding to a question on whether the efforts to decarbonise air and maritime transport under the FitFor55 package could negatively affect the mobility of an island state like Cyprus, Vălean presented the proposals she has made in the pack.

“One for shipping – decarbonization through the progressive adoption of cleaner fuels, one for aviation – a phased approach to blending sustainable aviation fuels with kerosene, and one for infrastructure – to ensure, through example, that electric car users in Europe have enough charging stations across the continent. All of these initiatives are market-based with a strong industrial angle,” she said.

According to the European Commissioner, “Our calculations show that hundreds of thousands of new jobs will only be created in Europe in the alternative fuels industry. Many more will be created across the world. The frontrunners will make a profit – and we we are, and we must remain at the forefront in the maritime and air sectors.”

And beyond the economic calculus, she added, “there are more and more good reasons to end our dependence on fossil fuels and move to a more resilient and self-sufficient energy system.”

“The transition isn’t easy, and it won’t happen overnight – it’s a gradual process with pragmatic goals and a stable regulatory framework allowing industry to adapt and invest,” she pointed out.

Regarding prices and costs, she gave an example saying that “our new proposal on aviation fuels, ReFuel Aviation, will determine in a first phase an increase of 8 euros per ticket cost on a long-haul flight – as Paris-NY and an increase of 1.7 euros increase for a short-haul flight, say Athens-Larnaca. But, as with any market, if the available quantities of alternative fuels increase, prices will go down.”

The new sanctions, a challenge but also an opportunity for the maritime sector

Asked to comment on her assessment of the prospects for the Cypriot maritime sector, particularly in view of the possible effects of EU sanctions on Russia, the Commissioner underlined that “if there is a country in the whole of the EU which includes really what an illegal and unwarranted invasion is, Cyprus is the one. We cannot continue to act as if nothing has happened while Ukraine is illegally occupied”.

“The sanctions will present challenges for the maritime sector in Cyprus as in other EU maritime nations. But it’s not all bad news for Cyprus. One of the effects of our banning Russian ships from EU ports was that Greek and Cypriot shipping companies took over the market share previously held by Russian tankers,” she added.

“Last week, the EU adopted the 8th package of sanctions targeting Russia’s oil revenues. They prohibit EU operators from providing maritime services and oil transport between Russia and third countries, unless the oil transported respects the price cap set at the G7 level,” she said. Explain.

“This means that Cypriot operators wishing to transport Russian oil by sea to third countries must ask the seller and the end buyer for proof that the oil is purchased at or below the ceiling price,” she said. .

“Given that the US, UK and Japan will also be within the cap, there are no major registries or non-European operators who could gain a competitive advantage from the situation. So I am very confident that the EU fleet, including that of Cyprus, cannot be replaced by any third country fleet, even combined,” she added.

EU backs subsidies for airlines to and from Cyprus

Asked how the EU can help solve Cyprus’ air connectivity problems, Commissioner Vălean recalled that “this summer has been an exceptionally busy season for European aviation” and added that “while the demand was high, industry readiness was low, businesses had capacity issues due to staffing shortages at airlines and airports, and prices increased due to high demand and high fuel prices.”

Indeed, she acknowledged, “for Cyprus, given the geography, the problems were even deeper”.

According to Vălean “we need a more efficient aviation system. For example, we need to establish a true Single European Sky. By modernizing the overall management of European airspace, we will automatically increase capacity.”

“I fully understand the frustration felt by the passengers. Passengers should always be the top priority. I have called on airlines to inform passengers in good time of any changes to their flights and to ensure they are aware of their rights,” she said.

“The issues affect the entire aviation sector, so all aviation stakeholders need to work together to resolve them,” she noted.

There is a limit, she added, “to what the Commission can do to help”.

“It is above all for the aviation sector to offer attractive working conditions and to ensure that social dialogue is in place. What we have done, however, is to bring together the different industry parties, business and employee representatives, to identify practical solutions,” she stressed.

“For Cyprus, in particular because it is at the eastern end of the EU, the Commission has supported and approved the public service obligation schemes for air routes and approved the granting of subsidies to all interested airlines flying to/from Cyprus. This program is still ongoing,” she explained.

Cyprus is a champion in car ownership, but a good start for mobility

Asked how the EU can help promote sustainable public transport, Vălean pointed out that “Cyprus’ mobility system is highly dependent on road transport. You are European champions in the possession and use of personal cars. But even car owners don’t like congestion. The European Commission encourages Member States to invest in good public transport, because citizens really need to have a choice.

“Cyprus is already off to a good start. In recent years, major cities such as Larnaca, Limassol, Pafos and Nicosia have developed or are in the process of finalizing Sustainable Urban Mobility Plans (SUMPs). An EU concept, SUMP aims to make mobility in and around cities more sustainable, and to help it better meet the needs of citizens and businesses,” she stressed.

“I was delighted to see Cyprus being so active during this year’s European Mobility Week. Six cities took part, in particular by organizing car-free days. Cypriot cities are also active and valued members of the urban mobility community. They are involved in several research projects supported by the EU’s Horizon 2020 research programme. These include the DESTINATIONS project, which is evaluating the effectiveness of innovative sustainable mobility solutions that serve both residents and tourists in six cities,” she said.

“Reorganizing urban mobility takes time and money, and I wouldn’t say otherwise. But the EU has various funding programs to support initiatives in this direction,” she continued.

The Cyprus Recovery and Resilience Programme, she noted, “indicated that it will invest in public transport, as well as a network of dedicated bus lanes, complemented by cycle lanes and park and ride facilities.” .

The plan, she added, “also foresees safety improvements at selected road junctions and the deployment of infrastructure to support intelligent transport systems. The EU will support this investment through its facility for recovery and resilience”.

“And I heard about your Nicosia tram project – I think it’s a good idea to take a first step towards the revival of railways in Cyprus,” she stressed.

The resumption of the maritime link is an important step

Commenting on the resumption of a maritime link with Greece and asked about the prospects for expanding this model, Commissioner Vălean said that “June 19 was a special day. I was very happy to see the Cypriot-flagged Daleela ferry set sail from Limassol, once again raising the curtain – after 21 years – on a sea route between Greece and Cyprus.

“This is truly an important step. It will certainly boost maritime tourism and give a welcome boost to the national economy. I know maritime connectivity is a recurring talking point for Cyprus, and I have been paying close particularly to the importance that Cyprus attaches to the maintenance of public service obligations between Cyprus and Greece,” she added.

“I hope this new ferry connection is just the start. Cyprus is committed to building a solid relationship with the rest of the Mediterranean and Europe, and I hope that the long-term maritime strategy in which the government is currently working will define concrete actions in this direction,” he said. – she continued.

“The fact that three candidates responded to the call for tenders for the passenger service between Cyprus and Greece shows how much interest is growing. This bodes well and could certainly be used as a model to increase connectivity with other European countries, as well as those in the EU’s southern neighbourhood,” she stressed.