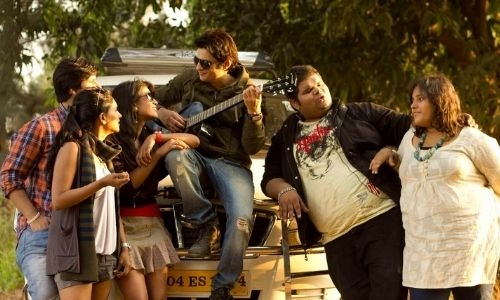 The first Bollywood film widely shot in Bahrain is making waves among Indian viewers clamoring for a horror-comedy sequel a week after its release on one of India’s biggest OTT platforms. Khel Kood Aur Bhoot (KKAB) – roughly translated as Fun, Frolic and Ghost – which also happens to be the first Bollywood film shot in the Kingdom of Bahrain, is the brainchild of award-winning Bahrain journalist turned filmmaker Adnan Malik. It was released on Friday, May 13 on MX Player, which has more than 300 million users worldwide, including countries like India, USA, UK, Canada, Australia, New Zealand, Bangladesh, Pakistan and Nepal.

“I always promote the Kingdom as a key destination for filming and tourism in the Middle East, and I’m overwhelmed by the response,” Malik told the Daily Tribune exclusively from Mumbai. Malik wrote, produced, directed, and starred in the film. “People are asking privately and also openly on social media platforms for a follow up and more importantly asking me about Bahrain and showing interest in traveling to the Kingdom for business and leisure, what more could I ask for ?” Malik said.

Malik’s lead couple, Poonam Mohapatra, wholeheartedly agree and told the Daily Tribune that “Bahrain is so beautiful and so inviting. There is so much to do and so much to see and I am truly grateful that my debut of acting have taken place in this beautiful kingdom,” she said. There are many firsts for this independently produced comedy horror film. It is the first Bollywood film to be shot in the Kingdom of Bahrain and Malik is the first and only Bahraini filmmaker in the prolific film industry considered the largest in the world.

“It’s a wonderful feeling for any independent filmmaker to see their film released, and I’m thankful to God that such a renowned OTT platform as MX has partnered with us to bring this film to life,” said Malik. , adding that the video streaming service attracts more than 200 million monthly active users in India alone. Its application on the Google store has already exceeded one billion downloads. OTT or over the top is a term used for a multimedia service offered directly to viewers via the Internet. It bypasses cable, broadcast and satellite TV platforms, giving users a plethora of options to watch their favorite content on many devices such as cell phones, smart TVs, computers, tablets, etc., and in different languages.

The Hindi film, with English subtitles, was released under his Mumbai-based personal banner, Malik Entertainment Movies Pvt. ltd. Over 85% of the film, including three songs, was shot in the Kingdom and the remaining 20% ​​in India. Apart from the scare, the film’s unique selling point is some of the jaw-dropping cinematography, including aerial shots of the Kingdom and filming of various well-known locations in Bahrain, including the Al Fateh Grand Mosque, the financial port, Bahrain World Trade Center, Bahrain Fort, Downtown Bahrain, Ritz-Carlton Bahrain Hotel and Spa and Lost Paradise of Dilmun Water Park. One of the highlights of the film is that it opens with a tribute to the Royal Family of the Kingdom, followed by acknowledgment of support from the Ministries of Information and Interior, and many others in Bahrain. and in India. “I am extremely grateful to many members of our Royal Al Khalifa family for their kind support, encouragement and inspiration to succeed.”

Malik said he was extremely overwhelmed by the grand words of HRH Prince Salman bin Hamad Al Khalifa, the Crown Prince and Prime Minister, who wished him ‘all the best for your film’ as he met him personally during one of his weekly majlises during the final stages of filming a few years ago. “We are blessed with kind, noble, wise and educated leadership who support, inspire, motivate and encourage Bahrainis and its residents to follow their passion and achieve their goals,” said Malik, who is a former correspondent Gulf for the American Associated Press Malik, who took on many roles in the making of the film, co-edited the film with award-winning Indian editor Abhijit Kokate.

The film’s music is conducted by award-winning musician Vijayaa Shanker, who also starred in the film. Meanwhile, KKAB’s Friday, May 13 release was timed with the horror-comedy theme of the 130-minute feature. “Since there has only been one Friday the 13th this year, I am grateful to God and thrilled that we were able to time the release of our comedy horror film on this historically superstitious day,” he said. he explains. He also posted a social media curtain raiser on the same theme a day before the release. Malik said he was hesitant to make any announcements or advertise the film until all the distribution formalities were completed, the release date locked in, and also because he wanted to use a strategy last minute “shock and wonder” release – an advantage of releasing a film on a digital platform that would not be affected or hindered by other theatrical releases.

“I wanted the movie to come out out of the blue, just like how ghosts appear out of nowhere,” he joked. Ahead of its OTT release, KKAB has already made waves on the international film festival circuit. Shortly after the film’s completion in 2019, it received an “Honourable Mention” at a prestigious film festival – Columbus International Film and Animation Festival – in the United States the same year. The film was supposed to hit theaters in India and the region in 2020, but then Covid-19 arrived and cinemas closed. Many Bollywood movies that were waiting for a theatrical release moved to release on OTT platforms and found their audience there. More ambitious films with huge budgets, however, continued to await the big screen.

Since cinemas opened to the public, India’s current backlog is now overwhelmed with back-to-back major releases amid the looming threat of another wave of the Covid-19 virus. The lockdown, Malik said, was a “blessing in disguise”, as it gave him time to further improve the film’s visual effects, color and sound in late 2021 and also recently. “There’s always room for improvement, and looking back, I’m glad it turned out this way,” Malik said, adding that the results paid off and he landed a contract. two-year distribution with MX Player with a single meeting.

“In my opinion, OTT platforms have now become an essential part of the entertainment ecosystem worldwide. As producers, we opted for the digital release after weighing all options, including financial constraints, target audience, distribution options, theater availability, release slate and schedule, and last but not least, the shadow of the ever-evolving pandemic.

“Unlike traditional theatrical releases which have to struggle with securing dates, adequate screens and worrying about ticket sales and maintaining large marketing budgets to promote films, OTT platforms are cost effective and easily accessible, giving filmmakers the flexibility to release hassle-free.” For an independent filmmaker like me, OTT has proven to be the best and most suitable choice because it is the most cost-effective, it has a greater reach and it has also been the most popular platform. resilient during the pandemic, which has disrupted and transformed content consumption habits.

“The end result has been that OTT platforms have given filmmakers a seamless distribution shift from traditional theaters and consumers the safer option of entertainment from the comfort of their own homes while the threat of Covid-19 still looms large. “, he explained. KKAB is a feature film inspired by real events, it is the story of six friends who embark on an improvised adventure of making documentaries to find out whether ghosts exist or not.

Their talks with the people of Mumbai lead them to a supposedly haunted house in the nearby suburb of Panvel where they come face to face with a haunting truth. “I am also very grateful to the people of Bahrain and India for their support and kindness, and to all my brand partners. “The film’s brand partners in Bahrain include McDonald’s, Columbus Café, The Ritz-Carlton Hotel, Gulf Air, Paradise Lost Dilmun and Forest Dew to name a few.

“Last, but not least, I would like to thank my parents – especially my father – for their prayers and blessings, and all of my family and friends for their love, support and encouragement.” KKAB is the first Indian film shot in the Kingdom. Filming for the film began “long before” the Malayalam film Mohavalayam, which was also shot in the Kingdom.